Windows has always been able to associate a file extension with an application. This means that when a user double...

Luckily, it's relatively easy to associate file extensions in Windows.

One way to do this is to launch the Default Programs applet -- select the Default Programs command from the Start menu -- and then click Associate a File Type or a Protocol with a Specific Program. In this dialog box, as shown in Figure 1, Windows lists every file extension it knows about as well as the application associated with each extension.

Figure 1: You can manage Windows file associations from this dialog box (click to enlarge). 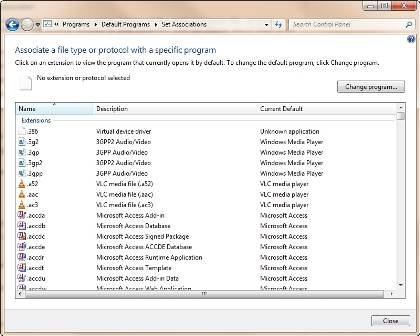 To reset the association for an extension, select the one you want to change, and click Change Program. Windows will display a list of applications known to support the file extension. If the application you want to use is listed, simply select it and click OK.

Unfortunately, I don't know of a safe and easy solution to this problem. While you can look up file associations with PowerShell, the technology doesn't support modifications. Therefore, your only option for making large-scale modifications is to work directly with the registry, and -- as I'm sure you know -- editing the registry is dangerous. One mistake can destroy Windows and/or your applications. As such, always back up a machine before attempting a registry modification.

Information related to file associations can be scattered throughout the registry, and since different applications can register file extensions in different ways, there isn't just one registry hive that can be modified in every situation to reclaim a file extension.

Therefore, you have to first determine which registry keys are affected by the file-extension modification. To do so, open the Registry Editor. Click on the Computer node at the top of the registry tree, and choose Export from the shortcut window. This allows you to export the entire registry to a text file with a .REG extension.

When you are done, export the registry (in the same way as above), and you should now have two separate registry files. Be sure to keep track of which is which. Use the Diff tool that comes with Visual Studio to compare the two registry files. The command will look something like this:

This command assumes that the registry files are named Before.Reg and After.Reg. The command's output should show all of the differences between the two registry files, and assuming that you haven't made any other changes to the PC, the differences should be directly related to the file extensions.

Next, navigate through the Registry Editor to each location referenced in the Diff output, right-click on the individual registry key, and export it to a .REG file. Now, you can import the .REG files into the computers on your network (don't import the Before.Reg or After.reg files) to fix the file association problems.

Manually fixing file-extension problems can be a lot of work. Sometimes it may be safer and easier to redeploy the application that should be associated with the hijacked extensions. But if that doesn't work, you may have no choice but to use the manual approach.

ABOUT THE AUTHOR
Brien M. Posey, MCSE, has received Microsoft's Most Valuable Professional Award seven times for his work with Windows Server, IIS and Exchange Server. He has served as CIO for a nationwide chain of hospitals and health care facilities and was once a network administrator for Fort Knox. You can visit his personal website at www.brienposey.com.

This method works well if only one computer has been affected by the file-extension hijacking. But what if the file extension has been hijacked on every desktop in your network?