The Mac OS is on a small but significant number of desktops in the enterprise, and Macs are more common in education and where graphics-intensive applications are used. IT administrators who may be familiar with only Windows desktops have nothing to fear, once they get familiar with these Mac OS tips.

In my previous article, we looked at basics such as system restores, partitions and migrations. This time, we'll look at five troubleshooting tools.

Yes, there is a command prompt

Mac OS is simply Unix in lipstick -- OK, it's more like Unix after a Hollywood makeover. To get to the command line, just open Terminal in /Applications/Utilities (and get used to the forward-slashes).

All your favorite Unix commands will work just fine, as well as the hundreds of commands Apple added that are specific to its OS. You can do anything with Terminal commands that you can through the graphical user interface (GUI) and a good deal more.

A tutorial on using Unix in Mac OS could fill a book, so let's just look at a few Mac tricks and shortcuts for working in the Terminal console. 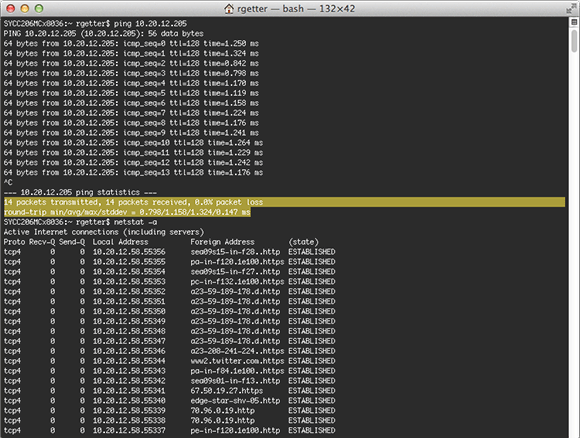 First, you should know that all your cut, copy and paste commands work just like they do in any Mac application. You can use drag text to copy it out of the Terminal console. There's no futzing around with Edit submenus as there is in the Windows command console.

Keyboard shortcuts, right-clicking and the edit menu all work. To enable a Windows-like right-click, enable the "Secondary Button" in the Mouse preference pane.

Like Windows, you can drag and drop a folder from a Finder window. Like most flavors of Unix, you use a forward slash "\" to escape spaces or special characters in your command lines. Keep in mind, though, that virtually everything in Unix is case-sensitive.

Unix throws another curveball to Windows folks: All the drive and partitions live in in the folder "/Volumes" (the slash that precedes it means it's under the root directory). It doesn't look this way from the GUI, but you'll need to know this when navigating from disk to disk.

Macs store nearly all user and applications settings in plain-text XML files with a ".plist" extension. Once in a great while, one of these will get corrupted, and the related application will hang or crash moments after it's launched.

All these preference files are stored in one directory, ~/Library/Preferences (the tilde is the Unix shortcut to the user's home directory). This is a lot easier to deal with than the Windows registry.

The bad news is that Apple has taken to hiding this folder because so many users have gone into it and messed things up. All you need to do is press the Option key while accessing the Finder's Go menu, and the Library will reappear.

Open the Preferences folder, and there they all are. Most of these are listed in the reverse-domain format -- for instance, "com.microsoft.office.plist" -- but not all publishers follow that convention.

Drag the plist file to the Trash or some out-of-the-way place, and restart the program. There's a good chance that it will start right up. If this doesn't work, you may have to remove and reinstall the program.

If the program has an official uninstaller, it usually resides in the same folder as the application. Most of the time, it's safe just to drag the program into the Trash and reinstall it. Otherwise, you may need to go to the developer's website to locate all the pieces to do a complete uninstall -- or Google "completely uninstall program name."

Many of the "hidden" support files that you normally look for in Windows' C:\\ProgramData folder are in the Mac OS /Library/Application Support folder. Likewise, the Mac's version of C:\\[username]\AppData is in the local library folder. You can get there in the Terminal console with ~/Library, but you'll need to hold down the Option key to make it visible in the Finder's Go menu.

The gray screen of death

Yes. It happens to Macs, too. You'll see a gray screen saying in several languages that you either need to restart your computer or that it was restarted because of a problem. In Unix land, this is known as a "kernel panic."

And, some essential shortcuts

As you've probably discovered, Macs use the Command key (⌘) in place of the Control key. The basic editing keystrokes are the same as Windows, but the Mac has a few little gems that are particularly useful to techs, especially if you need to go around and "touch" a roomful of Macs.

In most cases, this is a hardware-related problem, and it's sometimes transitory. The system will start just fine on the next reboot. If not, it is possibly a bad peripheral, so you'll need to disconnect them all, reattach them one at a time, rebooting as you go.

If that doesn't work, try booting to the Recovery partition if the OS is 10.7 or later, or an external drive to rule out a corrupted OS. If the dreaded gray screen continues to appear, you're probably dealing with something an Apple hardware tech needs to look at. If not, try a system reinstall.

If you see a gray screen with a flashing question mark and/or folder, it means the Mac cannot find a bootable volume. Either your OS or your hard drive is having problems. If you hear odd tones on startup, it usually indicates a major RAM failure.

To help troubleshoot startup problems, Macs have a safe mode startup that's a lot like Windows and actually does bit more for you. To perform a Safe Boot, which is what Apple calls this function, shut the system down and restart, pressing the Shift key as soon as you hear the startup tone. You can release it when the gray Apple logo appears.

A Safe Boot will take a good deal longer than a standard startup because it is first running an integrity check on the hard drive, performing any needed repairs and then clearing out some cache files that are the prime suspects in startup problems.

You may discover that the problems have disappeared the next time you reboot. This second reboot will be a little slower than normal, because it's rebuilding some caches it cleaned but ignored in Safe Mode.

Macs have never had a BIOS in the Wintel sense; it currently uses the Extensible Firmware Interface. But there are a number of persistent settings that are stored in firmware. When these get corrupted, they can cause problems that defy most troubleshooting logic. In fact, as a preventative measure, Apple techs recommend performing a parameter RAM (PRAM) reset after RAM upgrades or hard drive swaps.

To perform a PRAM reset, boot or reboot the Mac, pressing and holding down the Command, Option, "P" and "R" keys as soon as the system starts to come up. Keep holding them down until you hear the system chime three or four times. You'll notice that second and subsequent chimes are louder than the first.

All of the user-controlled PRAM settings will be restored from a disk backup as the system starts, so you shouldn't need to perform any configuration changes.

The System Management Controller (SMC) is another bit of firmware that can get messed up. It holds mostly power management settings, but it also may affect video and system performance.

On desktop Macs, the reset is usually to shut down and unplug the machine. Then, hold down the power button for at least five seconds, release it, plug the system in, and power it back on.

For Mac laptops, you'll have to search out the instructions for the model you're working on. Go to support.apple.com and search for "SMC reset" to find the appropriate steps.

Understanding and developing some essential skills with Macs -- and their users-- may take some time. Using these Mac OS tips will bring you a step closer to being able to show a bit of understanding and sympathy in this multiplatform world.

About the author:
Ric Getter is a programmer/analyst at Portland Community College, Oregon's largest institution of higher education. He focuses on enterprise deployments and remote system and application management. Getter has also been regularly writing about computers since 1999.