In the past, users at remote sites frequently clogged their WAN links when accessing large files stored on file servers at the home office. A 5 MB PowerPoint presentation on the shared drive at the home office can become 100 MB of network traffic as 20 people at the remote office each try to view it. With BranchCache, the file is downloaded to the remote office and stored in a local "cache" the first time it's accessed. Subsequent requests for the same file are served up from that local cache, reducing the network traffic to the home office.

BranchCache is seamless for the end user. A user would launch the file from the home office as usual. The request for the file is sent to the home office file server, where the BranchCache service takes over. If that file has not been previously sent to the remote office, it's copied and stored in a local cache, but if it has been sent BranchCache redirects the remote office computer to download the file from the existing cache on the remote network. All cached files are automatically encrypted to prevent unauthorized access. (Content is decrypted and delivered to the end user after the New Technology File System's access control lists have verified that they are allowed to see the data.)

To maintain integrity and ensure users are working from the latest documents, t BranchCache maintains a list of the files that were sent to each remote cache. When a request for a previously cached file is received, the service compares a cryptographic hash of the current file on the server with a hash of the file that was sent to the remote cache. If the hashes don't match, the document was modified after it was cached. As a result, a new version of the document is sent across the WAN to the remote location's cache.

The cache location at the remote office can be configured in distributed mode or hosted mode.

The distributed mode is the simplest to set up and configure because it doesn't require any special servers or software at the remote site. In distributed mode, documents are stored on individual Windows 7 computers at the remote office. The Windows 7 computer that downloads the document first becomes the cache for that document. Other Windows 7 machines that request that document will be referred to the Windows 7 system hosting the cached document. If that computer isn't online, the new computer will download the file and will become the cache for that document.

Since BranchCache is installed on Windows 7 clients by default, to turn on distributed-mode simply enable the service through Group Policy and select four predefined firewall settings for inbound and outbound discovery and communication. Group Policy settings can also be used to specify the percentage of disk space allowed for the cache as well as the network latency time that defines a remote connection. (By default, connection requests with greater than 80 millisecond latency are considered remote requests and automatically trigger BranchCache functionality, if enabled.) 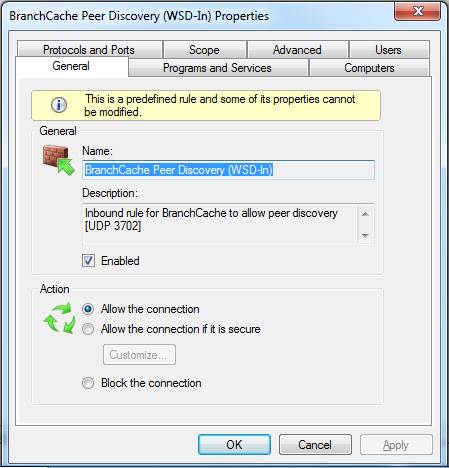 In hosted mode, a Windows Server 2008 R2 system must be present in each remote office location. The specified server is the central cache repository for all documents obtained from the main office. This mode provides higher availability for the cached documents since it's more likely to be "always on" than a Windows 7 computer in distributed mode. The hosted-mode BranchCache service can live side by side with other applications on a Windows Server 2008 R2 system.

BranchCache functionality helps reduce network traffic over slow WAN links and is intended to increase remote user satisfaction. However, the benefits of BranchCache are available only to Windows 7 Ultimate and Enterprise clients when accessing Server Message Block or HTTP content stored on Windows Server 2008 R2 systems. Perhaps it's time to upgrade?