USB flash drives come in handy for ferrying files to other systems, carrying bootable ISO images and even serving...

as cat toys (well, those on my desk get used for that, whether I like it or not).

One constant frustration I have with USB drives -- apart from the cat toy thing -- is how, when I sometimes plug one into a Windows machine, it will not mount. I know the drive works because it mounts just fine in another machine, and it might even have worked fine in this one before. But for some reason, in this particular machine, right now, it absolutely refuses to come up.

Over time, I've found a few consistent reasons why this happens and developed some troubleshooting strategies to work around this problem. It happens to me even with the newest drives and late-model PCs, so I can safely assume the problem isn't going away anytime soon.

Solution 1: A misinteraction between the hub and the device

All USB hubs are not created equal. I have learned this the hard way. I'm not just talking about the fact that one has "Belkin" on the front and another has "Rosewill." Different USB hubs, even from the same manufacturers, have profound differences in how they work under the hood that aren't apparent to the end user until something goes wrong.

More on this topic:

A classic example of this happened to me recently. I have a tiny USB dongle -- barely bigger than the socket itself -- which accepts a MicroSD card. Plug the card into the dongle, plug the dongle into your PC, and the contents of the card come up as a removable drive (in theory, anyway). When I plugged this dongle into my eight-port desktop USB hub, however, strange things happened. The contents of the card would appear for all of about five seconds, and then the drive would show up as blank.

After some experiments with another machine -- and backing up the card's contents there -- I ruled out that the drive itself was defective. It mounted fine elsewhere. Swapping in another MicroSD card didn't change anything. Finally, I tried plugging the dongle directly into the PC's front USB port. No prizes for guessing what happened: It mounted perfectly and hasn't given me a lick of trouble since.

So what happened here? My assumption is that there's a bug in the firmware for the hub related to certain classes of devices -- specifically, removable drives. Similar things have happened when I've connected digital cameras, for instance, to the system via the same hub. In those cases, I worked around the problem entirely by simply loading the camera's memory card into my PC's card reader, which is probably what I should have done in the first place.

Because there are so many USB devices out there and so many possible combinations of device plus hub, a full list of compatible devices is probably nigh-impossible to assemble. But this is worth keeping in mind as an initial strategy. If you're not getting any luck with the port you're using, try not only a different port, but also an entirely different USB connection -- a direct connection to the PC instead of a hub, or the back vs. the front.

If you can't get the device to mount no matter where it's plugged in -- and you know it worked before! -- then another possible explanation is that the device reference in the system's USB device database needs to be deleted and recreated.

There are a couple of ways to do this. The first, and possibly the most familiar, is to uninstall the device. If you can find the device in the Device Manager tree, all you need do is right-click on it (while it's still plugged in) and select Uninstall. 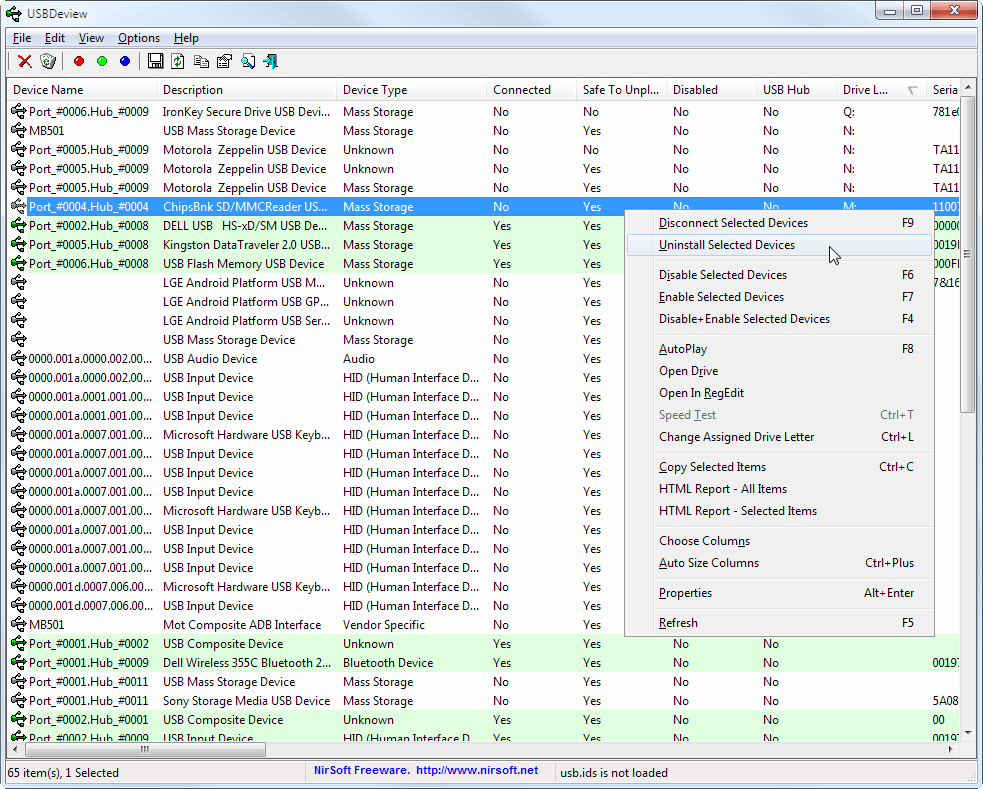 Another method involves a utility named USBDeview, which lets you see the entire USB device database regardless of whether or not the devices are plugged in. This is actually my preferred method -- if only because I can see a bit more information about the device I'm removing. Once you find it, you can uninstall it using the tool and see if that helps.

Run the USBDeview tool as administrator, and you'll be able to sort USB devices by a whole slew of parameters. (When I was debugging with the above-mentioned dongle, I sorted by drive letter.) Right-click on a device, and you can detach it, uninstall it and perform a host of other information-gathering operations on it.

Note that whichever method you choose, you'll need to reboot afterwards to make sure everything is set.

About the author:
Serdar Yegulalp has been writing about personal computing and IT for more than 15 years for a variety of publications, including (among others) Windows Magazine, InformationWeek and the TechTarget family of sites.