When defining a Windows desktop configuration, many administrators start with a default Windows deployment and...

then lock down the settings and features they don't want users to access. While this approach works, it's based on the assumption that a default installation includes all of the features available for that particular version of the operating system.

This isn't necessarily the case.

Windows 7 has several useful features that are not installed by default; some of them could benefit your organization.

To access these nondefault features, open the Control Panel and click on Programs. In the Programs and Features section, click the Turn Windows Features On or Off link. When you do this, Windows will display a dialog box where you can enable or disable several features, as shown in Figure 1.

Figure 1: Not all Windows features are enabled by default. (Click to enlarge.) 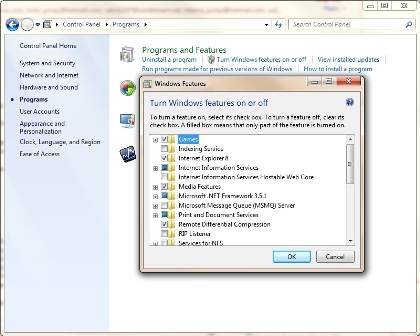 While you may not want to enable all the features, here are a handful of nondefault components to consider.

Internet Information Services
Although Internet Information Services (IIS) is typically thought of as a server component, it's included with Windows 7 and enables a Windows 7 machine to operate as a Web server. While you probably don't want your users hosting websites on their corporate desktops, this feature can comes in handy. For example, certain applications depend on a Web interface, and if you want to run these apps locally, IIS needs to be installed.

Internet Information Services Hostable Web Core
Like IIS, Internet Information Services Hostable Web Core (HWC) is a Web server that can run on a Windows desktop. However, HWC has a much smaller footprint than IIS and some rather significant limitations. For example, it only supports a single website or Web service, and therefore offers only a single application pool. It also has very limited monitoring capabilities and is intended to be managed remotely.

RIP Listener
This component listens for Routing Information Protocol (RIP) v1 updates. As a result, Windows will know of routing table changes. However, since RIP Listener is a legacy service, it won't help you if you have a network with a lot of different segments because RIPv1 does not broadcast the necessary subnet mask information.

Microsoft Services for Network File System
Microsoft Services for Network File System (NFS) allows Windows 7 to access Unix/Linux file shares through the NFS protocol. Although this service isn't new, Microsoft made several changes to it in Windows 7, including improving performance and adding support for multiple versions of Linux and Unix. It also included an Active Directory lookup feature that allows Windows to do Unix account mapping. Note that several services for NFS features -- like the Gateway for NFS, Server for PCNFS, User Name Mapping and all PCNFS components -- have be discontinued.

Simple Network Management Protocol
The Simple Network Management Protocol (SNMP) probably isn't something that you would provide to end users, but administrators may find it useful. SNMP allows you to manage various devices on your network. You can use it to configure network hardware, track down network faults and, in some cases, even track unauthorized access attempts.

Five things IT loves to hate about Windows 7

Telnet Server
Telnet Server turns Windows 7 into a Telnet host, and it's another service that you probably shouldn't allow users to run.

TFTP Client
The TFTP Client is a command-line version of the Trivial File Transfer Protocol. Although you may occasionally need to use the TFTP client to transfer files to or from a remote host, it's safe to assume that most end users would not know what to do with it.

Windows TIFF IFilter
The Windows TIFF IFilter performs optical character recognition on Tag Image File Format (TIFF) files, so that the text within those files can be indexed. Microsoft didn't enable this component by default because optical character recognition is very resource-intensive. However, if your users have a lot of TIFF files, then the performance hit may be worth the benefit.

While some of these nondefault components are outdated or relatively obscure, others may be useful in your environment.

ABOUT THE AUTHOR
Brien M. Posey, MCSE, has received Microsoft's Most Valuable Professional Award seven times for his work with Windows Server, IIS and Exchange Server. He has served as CIO for a nationwide chain of hospitals and health care facilities and was once a network administrator for Fort Knox. You can visit his personal website at www.brienposey.com.