By
The idea of having an alternative operating system that can be used to repair problems with a system's primary operating system is nothing new. Microsoft first introduced the Recovery Console with Windows 2000, and it has been present in every version of Windows that Microsoft has released since.

Fortunately, Microsoft has completely redesigned the Recovery Console in Windows Vista and the upcoming Windows Server 2008. The Recovery Console's new name is the Windows Recovery Environment, which is often abbreviated as WinRE.

Like its predecessor, you have the option of either running WinRE directly from the Windows installation media or installing it onto a system's hard drive.

If you choose to install WinRE onto a system's hard drive, Microsoft recommends that you use a different drive than the one that the operating system uses. That way, if a hard drive crash takes down the computer's primary OS, WinRE should still be accessible.

You can find full instructions for installing WinRE locally at the Windows RE Notes blog site.

Getting started with the Windows Recovery Environment

Accessing WinRE from the Windows Vista installation DVD is easy. To begin the process, boot your system off of the Vista installation disk. When you do, you will see a screen asking for your localization information, as shown in Figure A. 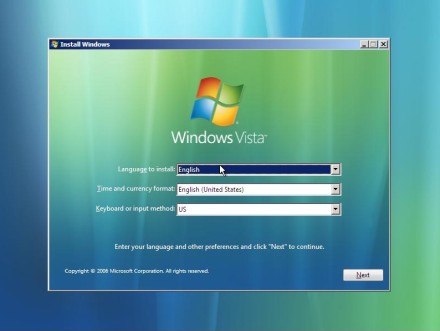 Make sure that your localization information is correct and click Next. At this point, Setup will display the screen shown in Figure B. Whatever you do, do not click the Install Now link or you will end up re-installing Vista. Instead, click the Repair Your Computer link found in the lower left corner of the screen. 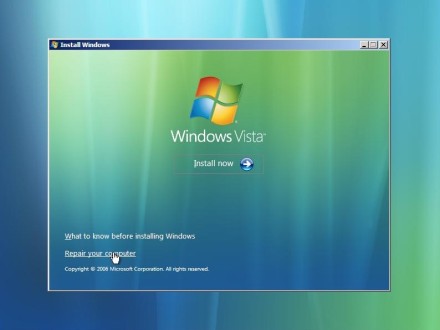 At this point, you will see a screen asking you to select the OS installation that you want to repair. In Figure C, you will notice that no operating systems are listed. The reason for this is simple -- I don't actually have Vista installed on this machine yet. In the real world, though, you may also run into a blank operating system list if the OS resides on a disk array that Windows does not have a built-in driver for. Fortunately, you are given the chance to provide WinRE with a device driver before continuing. 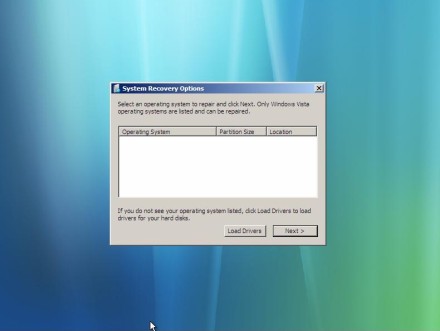 Incidentally, if your target operating system is not listed, don't give up hope. Even if no operating systems are listed, you can still click Next and gain access to WinRE.

When you click Next, Windows takes you to the main WinRE screen, shown in Figure D. There, WinRE gives you a lot more options than the Windows Recovery Console does. You still have the option of accessing a Command Prompt window, as shown in Figure E, but the majority of the restrictions that were present in the Windows Recovery Console have been removed. 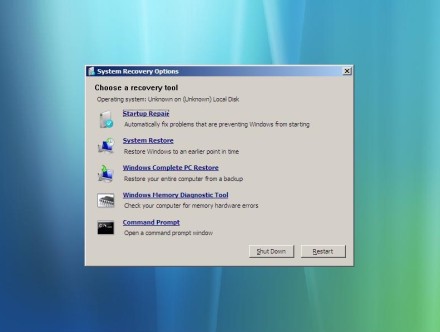 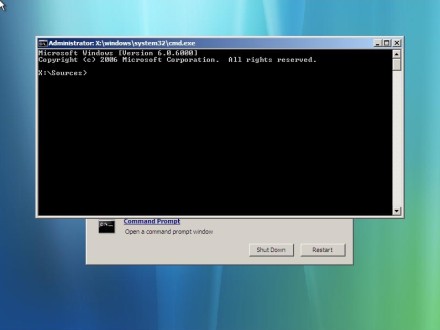 How to use Startup Repair

In WinRE, you will probably use the Startup Repair option the most. The basic idea behind this option is that if Windows won't boot properly, you can boot WinRE and then choose Startup Repair to perform a series of tests, as shown in Figure F. Startup Repair will then attempt to automatically correct the boot problem. 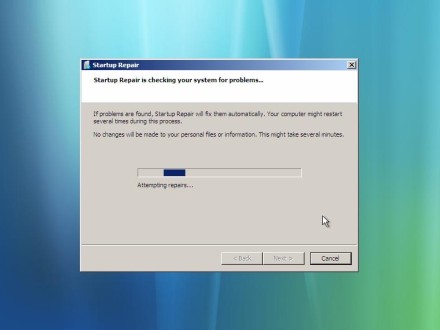 How to use System Restore

Occasionally, you may run into a problem with Windows Vista that you simply cannot fix. In that situation, use the Windows Complete PC Restore option to restore a backup.

One of the most common causes of Windows blue screen error messages (STOP errors) are memory problems. However, memory problems can be tricky to diagnose. Fortunately, WinRE comes with its very own memory diagnostic tool. Simply select the Windows Memory Diagnostic tool, and WinRE will inform you that a memory test will be performed as a part of the next reboot.